Archive for the tag “kiddies” 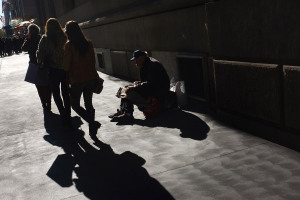 Never have I felt more invisible than after I delivered my second child and spent an afternoon at the mall with my gorgeous girlfriend.  (Talk about self sabotage.) Here I am around 4 weeks post delivery with a nursing tent hanging around my neck to conceal the wet marks on my chest looking like bulls eyes, chasing my busy 22 month old, while keeping my newborn shushed….a red hot smoking mess I was.  Here’s the invisible part, because I’m sure everyone and their relatives witnessed my “hotness” as I was chasing my boy, trying not to make the evening news!!!

We walked into a store and my friend watched my kiddies as I shopped.  I was struck and rather hurt at the non responsiveness of the store clerk.  It’s always been super easy for me to strike up a conversation with anyone and if we talk long enough, there are sure to be some chuckles…not this time.  This chick looked right through me and was about business…until my gorge girlfriend appeared with her purchases.  She was completely engaged and helpful.  I noticed and I realized for the first time that my outside was the obstacle to her acquainting herself with my inside.  I thought of that incident this morning as I was exiting the grocery store in a rush since I had gone for milk and ended up shopping for the week.

I saw him before I heard him.  He looked tired and dry.  He had his hand out and no one noticed him.  He was invisible.  As I passed by he asked if I had some change and I told him I might.  He took a seat in the shade and didn’t even look to see whether I was returning.  He, no doubt familiar with rejection, had no expectation that I would return.  I did and I asked him what he would do with the money I had in my hand.  He never looked at my hand, but he did look into my eyes and told me his intentions.  I asked him if I could pray for him and he said yes and bowed his head.  I laid my hands on him and sensed him relax after a few seconds.  As I prayed and spoke the word over him, he rocked back and forth as if I was singing him a lullaby.  That touched me so!  He looked up when I said amen with such appreciation and as I pressed the money into his hands he said “thank you, please continue to pray for me.”  “I will,” I said.

I was once corrected by someone I looked up to as a person who was well versed in the word.  He told me I should never sow my seed in ground where there would be no return…and that included giving to those outside of the faith.  That always checked me and so the one time a down and out friend asked for money, I sat next to her and ministered the word to her before I blessed her financially.  Then I realized, Jesus never expected folks to clean up first  in order to receive forgiveness, healing, etc. so why should I?  They will know we are His disciples, not by our prayers, our gifts, our good works, but by our love.  Love does…it moves…it acts!  I have no idea what Mykel will do with the money I gave him and that is not for me to judge.  I simply asked him so that he could hear himself respond and I pray that, for his own good, he was telling the truth.

Today, it came back to me why I was allowed to experience that sadness on that day.  I was made to experience in a snapshot what many feel for a lifetime.  Would you stop…would you at least stop long enough to extend a hand, say a prayer, acknowledge someone’s existence?  I’m praying today for the invisible; that they experience a healing touch and that they come to the knowledge that He sees…He hears…He moves…and most times it’s through people!